As an avid hiker and Master Naturalist, Stephanie was determined her hip pain wouldn't stop her from enjoying the outdoors. After putting up with the pain for several years, Stephanie sought treatment with Dr. Donald Hohman, an orthopedic surgeon on the medical staff at Texas Health Center for Diagnostics and Surgery. 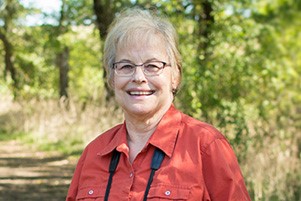 The story of Stephanie Varnum’s hip replacement “journey” starts in West Texas, continues through the Panama Canal, and ends up in the beautiful forests of eastern Pennsylvania.

Stephanie loves travel and hiking – especially when it brings her close to nature. In 2002, she became a Texas Master Naturalist, a certification from the Texas Parks and Wildlife Department and Texas A&M AgriLife Extension Service. (To earn the certification, Master Naturalists complete extensive training in forest, prairie, and water ecosystems.)

When her left hip began to hurt several years ago, Stephanie worried it could limit her ability to enjoy those hobbies. The pain started getting noticeably worse by February 2017, when she traveled with friends to West Texas, visiting Alpine, Marfa and Big Bend National Park. Still, Stephanie was able to keep up on hikes with her friends and manage the pain with ibuprofen at night.

But a few months later, when she took a “bucket list” cruise through the Panama Canal, her hip began to really bother her.

“I didn’t sleep well at night,” she said. “The pain was becoming a problem.”

When she returned, she saw Dr. Donald Hohman, a joint replacement specialist on the medical staff at Texas Health Center for Diagnostics and Surgery. X-rays showed significant damage in her hip. Dr. Hohman told her she was a candidate for hip replacement, and encouraged her to proceed sooner rather than later, given that Stephanie was healthy and had no other major medical issues.

After trying an injection of steroids in her hip – with no improvement – Stephanie scheduled the surgery for July. The day before, she attended an orientation program, where she pre-registered, toured the surgical floor and met some of the nurses who’d be caring for her.

“The orientation was excellent,” she said. “I felt very comfortable going into it.”

Surgery proceeded the next day as planned. Six hours later, Stephanie was up and walking. Medications kept the post-op pain to a minimum without making her feel groggy or nauseated.

“Dr. Hohman’s bedside manner was wonderful,” she added. “I told him, ‘I know you’ve spent thousands of hours training to do this. As a recipient of your expertise, thank you.’

Stephanie followed the prescribed regimen of post-op exercise and then physical therapy. Having favored one hip for years, she had to work hard to get some of her muscles back in shape.

The effort paid off. Recently, just eight weeks after surgery, Stephanie joined a group of friends for a trip to eastern Pennsylvania. They strolled through Longwood Gardens in Kennett Square, Pa., and hiked up Hawk Mountain, located in a wild bird sanctuary in Kempton, Pa.

Stephanie walked two to four miles each day on the trip. At the end of each day, she was tired – but had no pain.

“My father had a hip replacement about 25 years ago,” she said. “I remember he was in a lot of pain after the surgery and really struggled. To see how much easier the recovery is now – it has just been a quantum leap.”