Many women contend with pelvic discomfort or irregular menstrual bleeding from time to time. It’s always important to discuss these concerns with your primary care provider. However, if pain or abnormal bleeding become severe, chronic or recurrent, consider consulting a specialist in gynecology. A gynecologist can help determine the right diagnosis and offer an array of treatment options – including many new medications and minimally invasive surgical techniques that weren’t available just a few years ago.

“There are a variety of common gynecological conditions that I see in my clinic, said Dr. Nguyen Nguyen, a gynecologist on the medical staff at Texas Health Center for Diagnostics and Surgery in Plano, Texas. “Many of these conditions involve menstrual bleeding – either too much bleeding, irregular, bleeding, too little bleeding, or no bleeding at all. Pelvic pain is another common condition we help patients address as well.”

For these conditions, surgeons typically employ an array of treatment options, ranging from observation, lifestyle changes, medications, and, as a last resort, surgery.

Below are some of the most common gynecological conditions.

Endometriosis is a common gynecological problem that often causes pain, especially during menstruation. While many women experience cramping during their menstrual cycles, pain due to endometriosis is often far worse than usual and may increase over time.

With endometriosis, the tissue that normally lines the inside of your uterus — the endometrium — grows outside of the uterus. Endometriosis most commonly involves the ovaries, fallopian tubes and the tissue lining the pelvis.

During the monthly menstrual cycle, the endometrial lining is shed. However, for women with endometrial tissue outside the uterus, the tissue sheds but has nowhere to go, resulting in scar tissue and painful inflammation. 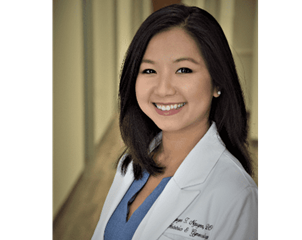 “Fortunately, we have many new treatment options for patients with pelvic pain caused by endometriosis,” said Dr. Nguyen. “We have new medications that just came along recently that we can prescribe in the clinic. One medication basically acts to suppress the hormone that can aggravate the endometriosis. So that's something new that we've been using. It's had a lot of benefits, especially for younger people who don't want to do further surgery for pelvic pain.”

Symptoms of endometriosis include

Getting to a diagnosis of endometriosis can be challenging, because other conditions may cause pelvic pain, such as pelvic inflammatory disease (PID) or ovarian cysts. Similarly, endometriosis may be confused with irritable bowel syndrome (IBS), a condition that causes bouts of constipation, diarrhea and abdominal cramping. To further complicate things, it is possible for a woman to have IBS as well as endometriosis.

Doctors aren’t certain what causes endometriosis, but there are several factors that may increase your risk:

Approximately one-third to one-half of women with endometriosis have difficulty getting pregnant, but many women with mild to moderate cases do conceive and carry their pregnancies to term. Endometriosis is also associated with ovarian cancer, which occurs at higher than expected rates in those with endometriosis. However, the overall risk is still relatively low.

Uterine fibroids, or myomas, are another common source of abnormal menstrual bleeding and pain. These noncancerous growths can occur at any age, but they’re most common among women in their 30s and African American women. Fibroids aren't linked to uterine cancer and almost never develop into cancer.

“Uterine fibroids are a common reason for heavy bleeding,” said Dr. Nguyen. “We have a new treatment, a medication, that can help decrease blood loss due to fibroids, and theoretically may help shrink the fibroids, although the evidence is not yet conclusive.”

Uterine fibroids can develop outside of the uterus (subserosal); under the lining of the uterus (submucosal); or within the uterine wall (intramural). In addition to heavy, extended periods, women with fibroids may experience pain in the lower back, pain during sexual intercourse, a frequent need to urinate or difficulty urinating, and a sensation of pressure in the abdomen. If heavy blood loss is occurring, fibroids may also lead to anemia (a drop of in red blood cells) and fatigue.

Fibroids range from very small – too small to be detected by the human eye -- to bulky masses so large that they distort and enlarge the uterus. A patient may develop a single fibroid or multiple ones. In extreme cases, multiple fibroids can expand the uterus so much that it reaches the rib cage and can add weight.

Many women have uterine fibroids sometime during their lives and experience no symptoms. Fibroids may grow rapidly, or slowly, or stay the same size. Doctors sometimes discover fibroids during a routine pelvic exam or prenatal ultrasound.

Doctors don't know the cause of uterine fibroids, but genetic changes and hormones may be contributing factors. Compared to typical uterine muscle cells, fibroids contain more estrogen and progesterone receptors.  Often, fibroids will shrink after menopause, as hormone production decreases.

Other possible contributing factors may include obesity, early onset of menstruation, Vitamin D deficiency, alcohol consumption, and poor diet (i.e. a diet high in red meat and lower in green vegetables, fruit and dairy.)  Although there’s little scientific evidence on how to prevent fibroids, healthy lifestyle choices, such as maintaining a healthy weight and eating fruits and vegetables, may decrease your fibroid risk. Some research suggests that using hormonal contraceptives may be associated with a lower risk of fibroids.

This broad term encompasses abnormal vaginal bleeding due to conditions other than endometriosis or uterine fibroids. Whether vaginal bleeding is abnormal depends upon the phase of a woman’s life. For example, for pre-pubescent girls, any type of bleeding is considered abnormal. Ditto for women who are pregnant or post-menopausal.  For women of menstruating age, abnormal bleeding may involve bleeding between periods, excessive bleeding during menstruation or not bleeding at all. Symptoms may include spotting during periods, periods that last more than seven days, or severe pain during menstruation or during sexual intercourse. Abnormally heavy bleeding requires more than one tampon or pad per hour for several hours. Menstrual cycles that are longer than 38 days or shorter than 24 days are also considered abnormal.

For these problems, the physician may initially recommend observation – a “wait and see” period to see if symptoms might resolve on their own. They may also prescribe medication or recommend lifestyle changes.

If these have been tried, and symptoms continue to persist, the physician may discuss surgical options with the patient. Surgery is usually the last resort.

Dr. Nguyen is experienced in a variety of gynecological surgeries.

“Some of the most common procedures that I perform as a gynecologist include dilation and curettage, or a D&C; hysterectomy; endometrial ablation; and diagnostic laparoscopy, to checking for endometriosis or other sources of pelvic pain,” she said.

For patients with large fibroids in the uterus, the surgeon may recommend a recently developed surgical technique called ExCITE (Extracorporeal C-Incision Tissue Extraction).

“We use this technique in situations where the patient has one or more huge fibroids in the uterus, much larger than the typical incision of 3 centimeters,” she said. “With ExCITE, we employ a carving technique inside of a bag to extract the fibroid. This ensures no material from the fibroids is left inside the body. This has been an excellent option for my patients with very large fibroids who wanted to avoid doing open surgery.”

For hysterectomy and other surgeries, the surgeon may suggest vNOTES (vaginal natural orifice transluminal endoscopic surgery), an advanced minimally invasive gynecologic surgery.  Using specialized vNOTES instruments, the surgeon accesses the pelvic cavity via the vagina. With vNOTES, the surgeon can operate on the uterus, fallopian tubes or ovaries without making an incision or needing to cut through muscle tissue.

“The American College of Obstetricians and Gynecologists, the primary professional organization for obstetrician–gynecologists, states that the best type of hysterectomy is vaginal,” said Dr. Nguyen.  “With vNOTES, the patient recovers more quickly and experiences less pain or scarring. That means a shorter hospital stays and a decreased need for pain medication. Patients can get back to their lives, free of the symptoms that have been troubling them.”

If you’re in need of treatment for issues related women's health, the team at Texas Health Center for Diagnostics & Surgery is ready to assist. Surgeons on the medical staff are experienced at carrying out a variety of treatment options for women's health related conditions.  Get in touch with the team today — we can help discuss the best options for your medical needs.